We don’t always have angels posing for us on Tuesday nights. Sometimes it’s just a goddess who’s in charge of an upcoming holiday, like Valentine’s Day, for example. I’m not sure everyone realized what she was up to while in this pose, but her spell worked pretty well on most of the men and at least half of the women.

I’m spending more time in the Etching Studio and slowly learning how to combine various techniques. And trying improve basic skills like inking and wiping a copper plate. This digital image, based on a scanned etching, which was based on a drawing from a Tuesday night drawing group, combines soft ground and drypoint techniques. The original etching is 6" x 5". The digital print shown here is 12" x 15", which doesn’t include a 1" border of plain white paper all around.


These copperplate etchings (soft ground method) are based on charcoal drawings done at the famous Tuesday Night Drawing Group at the famous Argos Gallery & Etching Studio in Santa Fe. I scanned the etchings, then made digital prints of the etchings.

Charcoal to etching to digital. Or, Tinker to Evers to Chance. That’s an expression often used to characterize a process that happens with smoothness and precision . . . if you’re old enough to remember the three baseball players who became famous for their skill at making double plays for the Chicago Cubs in the early 1900s (491 double plays between 1906 and 1910).

I wouldn’t know who they were except for the fact that nearly 50 years ago I worked with a copy writer at an advertising agency who came up with a campaign for a client called “Great Combinations.” One of the combinations featured in the series of ads was Tinker to Evers to Chance.

Their fame was equally due to a poem written by a New York Giants sports writer after watching the trio play against his home team Giants. The poem is known as Tinker to Evers to Chance. It’s also know as Baseball’s Sad Lexicon.

A gonfalon (line 5 of the poem) is a pennant or flag, or, in this case, the National League championship (represented by a pennant). The poem was so popular that it was credited with getting the three players into the Hall of Fame.

For almost 50 years I’ve never been able to forget their names. You probably won’t be able to either, but good luck with that.


Prayerful. That’s probably not the word most would use to describe the ambience at the Tuesday Night Drawing services. But we are thankful for such great models and for the artistic fellowship of the Tuesday night congregation. And we’re grateful that Argos Chapel — I mean Gallery — provides an inspirational venue for artists whose souls thirst for drawing (and etching) fulfillment and artistic meaning.

Nothing else to say, I guess, other than “Amen.”

One of the charcoal sketches from last Tuesday night’s life drawing group. I’m go to the Etching Studio tonight and tomorrow so I can make an etching of this drawing.

Now I’ve progressed or regressed into a process of drawing a life model in charcoal, using the drawing to create a traditional etching, then scanning the etching to manipulate it in Photoshop. Very cool (I think) because I end up with an etching and the possibility of virtually unlimited variations for digital prints. Fun stuff.
Posted by jt at 10:49 PM


As I mentioned before, I’m learning how to etch. You can't tell by this etching, but I’m making progress. Part of making progress is learning from your mistakes. This mistake pretty much falls into the Epic category. Just about everything bad that happened here happened at the stage of applying a soft ground coating to the copper plate: the ground is too thin, unevenly & sloppily applied; fingerprints and smudges along the edges. A real crash-and-burn etching scenario.

But wait—I sometimes spend hours in Photoshop trying to make images look this grungy. I’ve paid money for backgrounds this ugly. So rather than throw the plate and print away, I scanned the bad etching, used Photoshop’s clone tool to remove the most distracting blobs and blotches, then (most importantly) pretended I created this effect on purpose (a secret trick used by famous artists).

Ten years from now I fully expect for someone to say “I know that image. Ten years ago my art teacher used it as an example of incredibly bad etching technique.”

Genius is seldom recognized in cases like this. However, I do feel like I’m starting to get that tortured-artist feeling. I think that’s probably a good sign. 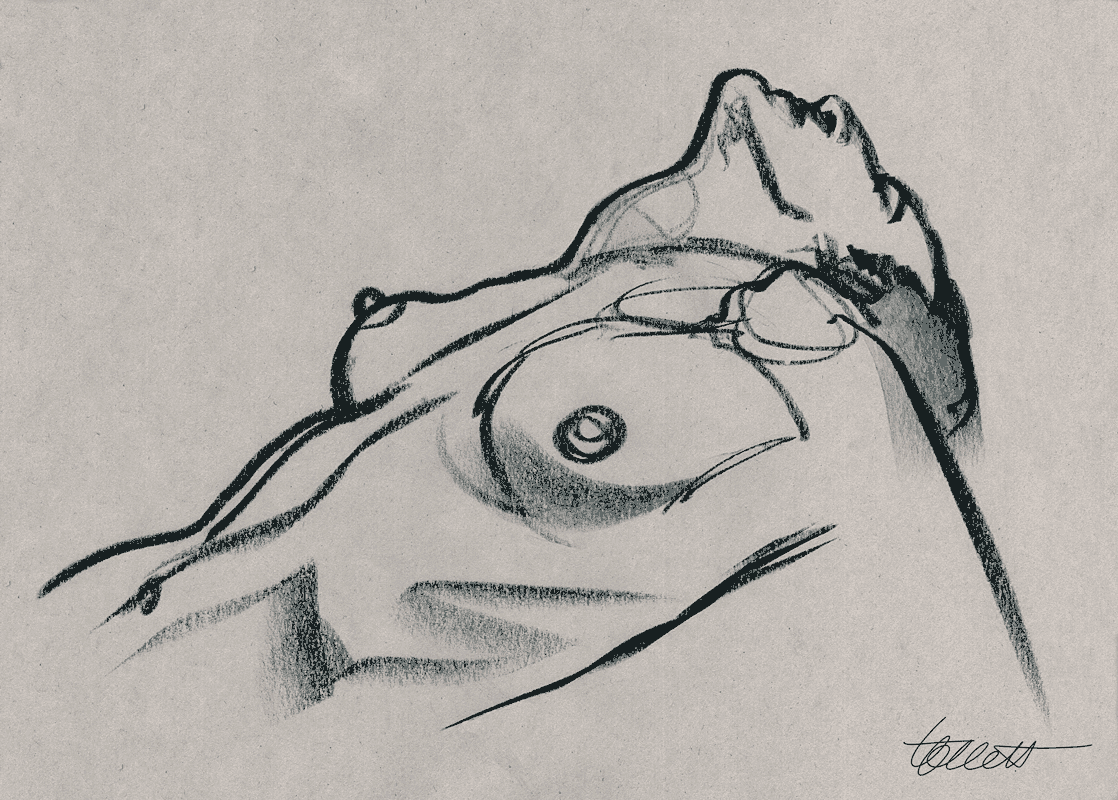 Some drawing nights consist more of failures than good drawings. A failure is a drawing I don’t like. I usually don’t like a drawing because the proportions are way too inaccurate. I usually blame that on not having enough time on the pose. I’ve pretty much decided that when I’m drawing bad, if I like at least one drawing out of the approximately 20 poses that happen during a Tuesday night session, I’m happy and the three hours spent at the studio were worth it.

Even if it’s just a two-minute drawing, like this one.

Within the past month I visited a couple of other drawing groups in the area. One is in Los Alamos, 45 minutes away, and the other is a Wednesday night group that's just a minute down the road from where I live. Very convenient. 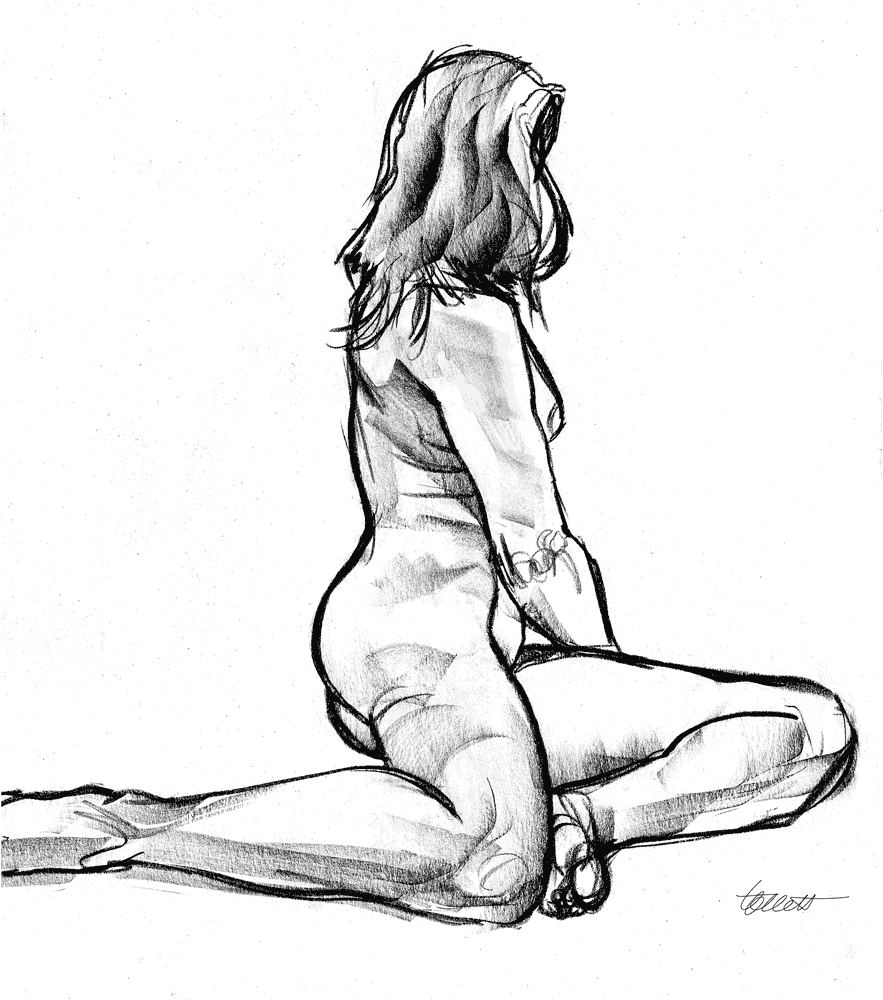 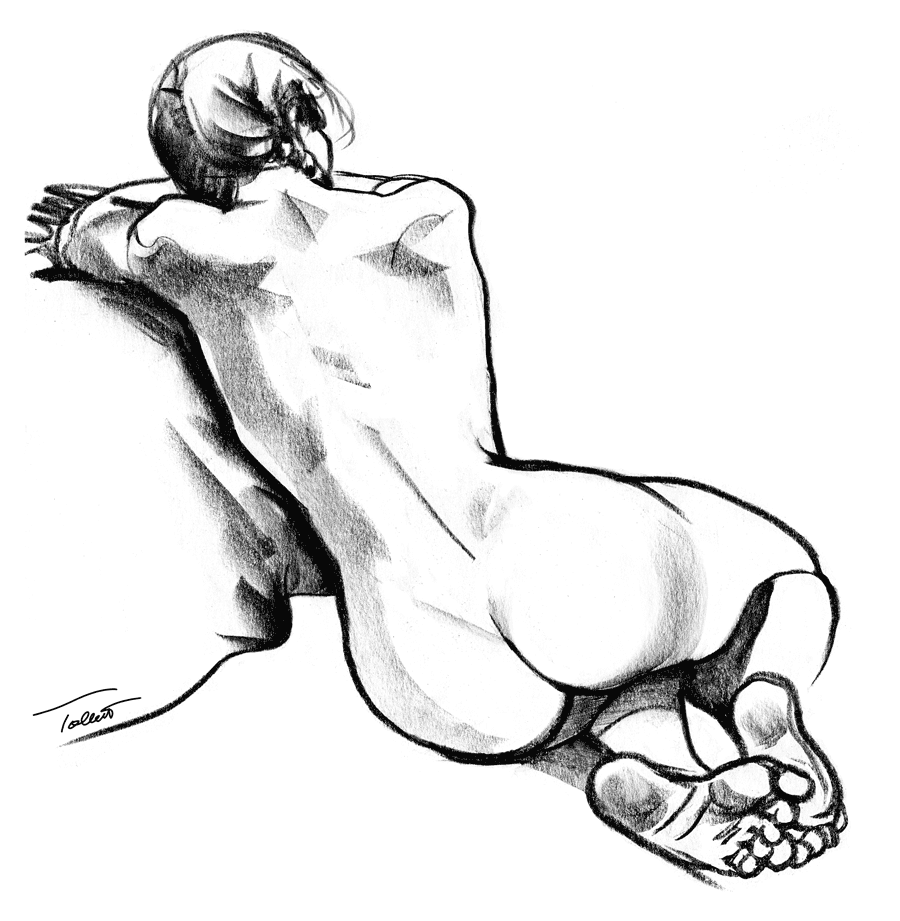