We did a lot of walking yesterday. Almost 15 kilometers according to Jimmy's app. And, as usual, we did a lot more and took more photos than I've had time to include in this blog. But that's a good thing. I've shown a lot more food photos than I ever thought I would. Sorry about that. 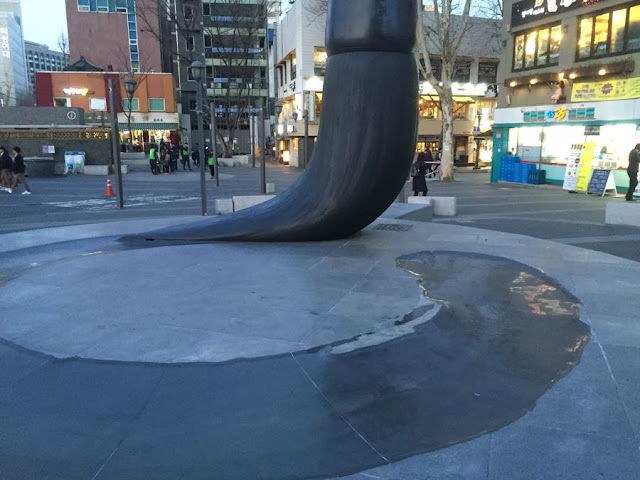 A giant calligraphy brush bronze sculpture reminds me that I haven't had time to sketch. 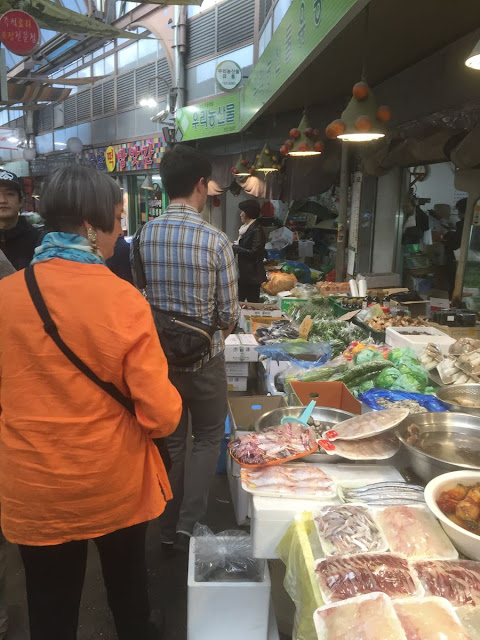 After visiting the palace mentioned in a previous blog this morning, we found a market that a friend of Jimmy's told us about. It's a long alley of food shops. You go to an upstairs dining area in the middle of the market and buy a handful of tokens (5,000 won for 10 tokens: approximately $5). You're given a plastic plate and then you stroll through the market picking out food from stands that have a special sign saying they are part of the food deal. Most items cost 2 tokens. Then you take your plate of food back to the upstairs dining area and try to find a place to sit. Or you can eat as you go. 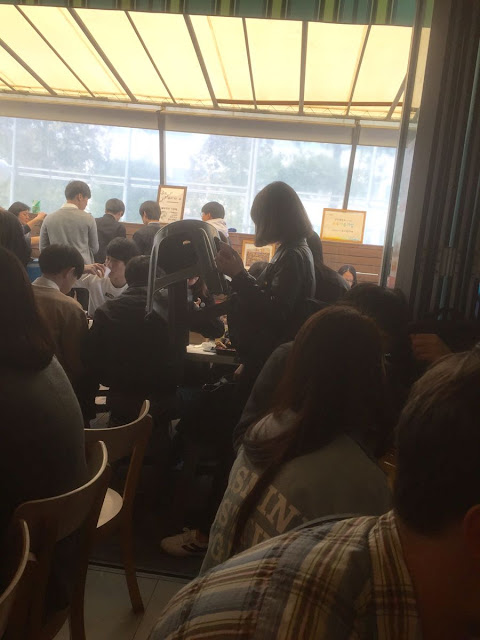 The dining area was crowded, but we squeezed in. 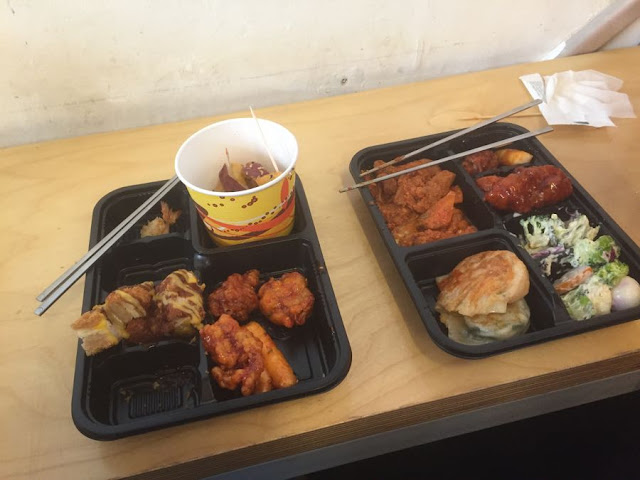 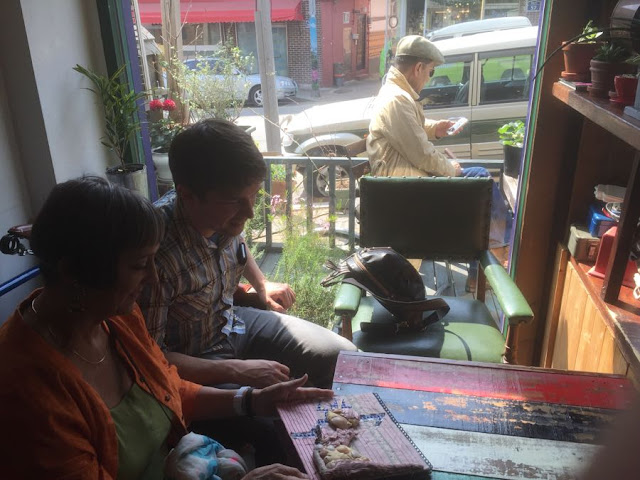 An hour or two later we found ourselves far from the big city stuff and stopped at a small, very cool looking coffee shop. There was a cool looking guy sitting out front. I almost asked him for a photo, but decided against it. After we relaxed and paid for our coffee, the woman owner gave us a bag of fresh ground coffee and said the guy outside had given it to us. Turns out he's the coffee grinder, an artist, and musician. 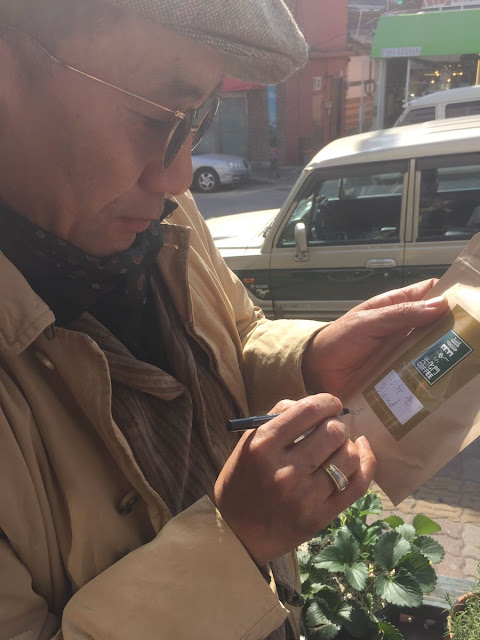 Robin asked him to autograph our bag of coffee. I used my Google Translate app to tell him thank you for the coffee. When in Korea, I like to hang out with cool guys. Jimmy noted that not just anyone can pull off the Lennon-glasses look, but this guy owns it. 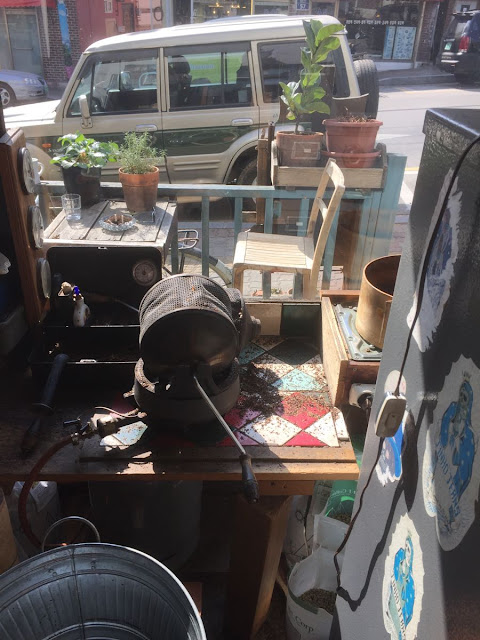 The coffee-grinding station in the coffee shop. 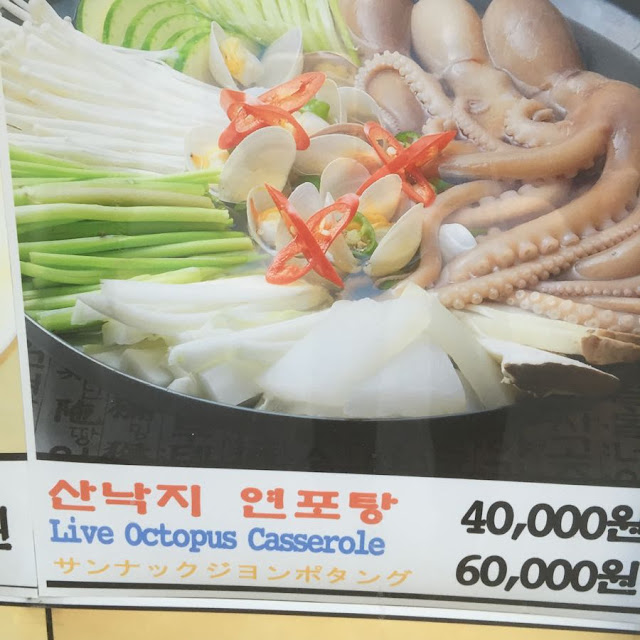 Last night we checked out a lot of menu signage as we walked past endless food shops. This is one of the options we passed on. 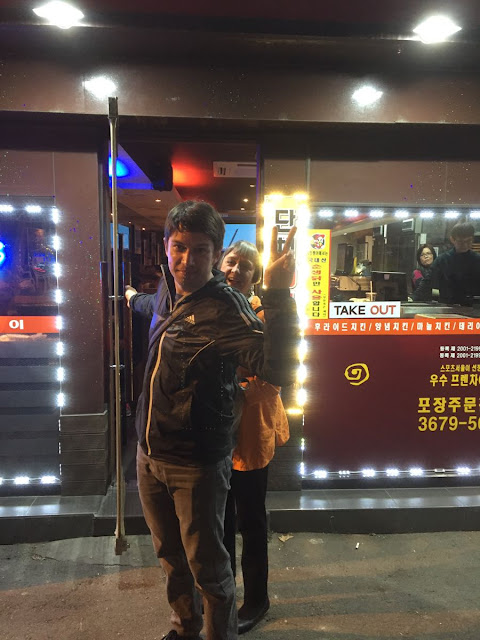 We ended up at this small-but-great place located in a small alley across the street from our hotel. Lots of different kinds of fried chicken.